If you don’t want a coalition, buck your ideas up.

With 87 days to go until the general election on May 7, voters are fearful. Nobody wants a hung parliament, but it is clear that unless the parties answer the voters’ key questions, that is what we are going to get. Voters are fearful. I understand why.

Chasing the grey vote? How dare you suggest such a thing! David Cameron has signalled his intent that universal pensioner benefits such as the winter fuel allowance and free bus passes will be protected under a future Conservative government, claiming that cutting them would not create “huge savings” and that it was “unfair” as “when you’re a pensioner it’s more difficult to adjust to your circumstances.” Despite proclaiming their solidarity with hardworking young people, there is little in the Conservative manifesto that will speak to the younger generation. When it comes to youth voting intention, Labour has 15% lead (Opinium). Blatant grey vote chasing is unlikely to help the Conservatives’ avoid a hung parliament.
The EU? There has been much posturing from the different wings of the Conservative party over when an EU referendum should take place, and whether Britain should stay in or out. While David Cameron has signalled his intent to hold a referendum and to renegotiate our relationship with Europe, it is clear that a “Brexit” is the last thing he wants, much to the dismay of his backbenchers. This uncertainty and internal posturing is off-putting for businesses and youth voters, with 67% of young people saying they would vote to remain in the EU, as opposed to 19%. The Conservatives are chasing the wrong issues.

The economic plan? Labour’s economic plan seems to be Conservative-lite; cuts and austerity, but only nice cuts and nice austerity. To cut the deficit as it has promised means that it will have to make savings when it comes to the welfare budget. Criticising Iain Duncan Smith’s Department for Work and Pensions’ welfare cuts seems to have become second nature to many Labour MPs – having to do so themselves will cause division.

The NHS? Young people say that the NHS is their top priority, with 47% placing it as their number one concern (Opinium). When it comes to the party people think is most likely to be beneficial for the NHS, Labour enjoys an 18-point lead over the Conservatives (Lord Ashcroft). However, I struggle to have faith in any of the parties’ solutions to fix the NHS. Labour’s plan is to just chuck money from the proceeds of their Mansion Tax at it, with the kind of harder, long-term reformist thinking that we saw with the previous Labour government sorely lacking. Pull your socks up, Ed. 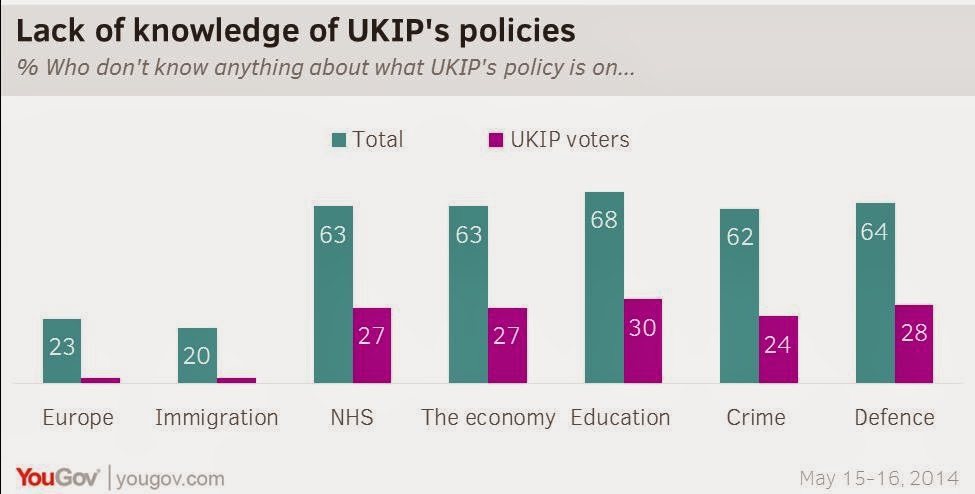 Economic policy? Besides a “wag tax” on luxury handbags and shoes (which they scrapped), Ukip seems to have little in the way of credible economic policy to stimulate growth and cut the deficit. Nigel Farage has said that he wants to cut public spending back to 1997 levels with the loss of two million public sector jobs, as well as merge income tax and national insurance into a flat 31% for all, starting at £11,500. 63% of voters and over a quarter of their own voters don’t know what Ukip’s economic policy is (YouGov). Don’t know about you, but their approach (or rather lack of it) doesn’t inspire confidence in me.

The NHS? Ukip has said that they want to see more of an American-style system where the NHS should be funded through private health insurance. Yet, Ukip has pledged an extra £3 billion a year for the NHS. More clarity here please.

Reality of leaving the EU? The Times on January 27 summed it up pretty aptly: “There are huge gaps in the party’s explanation of what would actually happen if Britain left the EU.” ‘Nuff said.

Citizen’s Income? Natalie Bennett, leader of the Greens has pledged that every adult in the UK, whether unemployed or not, should be given a citizen’s income worth more than the current Jobseeker’s Allowance of £72.40 per week. The estimated total cost comes in at £240 billion, which is a pretty conservative estimate. Two questions Natalie: why does EVERYONE need a citizen’s income merely for being alive? And where’s the money?!

Terrorism? Want to join IS? Good news! According to the Greens, that’s completely fine and should be totally legal. (Perhaps back to the drawing board on that one.)
Want to support young writers? Then please share!

Chairman at Filibuster
Adrian Burbie is the Chairman and founder of Filibuster. He is an 18-year-old student studying politics, economics, history and maths at A-Level and has a fondness for jazz, strong dark chocolate and Yorkshire Tea. Adrian is also a stressed supporter of Liverpool FC and the Welsh rugby team. He lives in London with his family and tortoise, Usain Bolt. He is a "one-nation" Conservative, and tweets @a_burbie.
Follow me

If you don’t want a coalition, buck your ideas up. was last modified: September 4th, 2015 by Adrian Burbie