Saudi Arabia has long been the central power of Sunni Islam, but now some of its people have embraced new Salafist and Wahhabi ideologies. With the death of the 90 year old monarch Abdullah, there may be change, but will democracy and secularism reach through the war-torn region to turn people away from fundamentalism, or will the Middle East relapse into medieval times? Is it time to change allegiances to ensure our continued security?
Where In The World? #WITW
By Janith Peiris
________________

Salafi movement: a movement of a strictly orthodox Sunni Muslim sect advocating a return to the early Islam of the Koran and Sunna.
Shia: one of the two main branches of Islam followed by about a tenth of Muslims, especially in Iran, that rejects the first three Sunni caliphs and regards Ali, the fourth caliph, as Muhammad’s first true successor.
Sunni: one of the two main branches of Islam, commonly described as orthodox, and differing from Shia in its understanding of the Sunna and in its acceptance of the first three caliphs.

Wahhabism: The Wahhabis, founded in the 18th century, are the most conservative Muslim group and are today found mainly in Saudi Arabia
_________________


Last month, King Abdullah of Saudi Arabia passed away and was succeeded by his more orthodox half-brother, who promised to continue supporting America. The question I pose to you is that after years of supporting this dictatorship, should we not try to advocate some democracy? After all, aren’t we, the West, meant to promote the ideals of democracy, libertarianism and freedom?
Saudi Arabia has been our long held ally with our most precious commodity, oil, sold at dirt cheap prices so as not to condemn what has really become a breeding ground for fundamentalist Sunni Islam. Earlier this year, Saudi Arabia beheaded 21 people for crimes like sorcery, atheism and drug smuggling; likewise the death penalty is also in full force within Iran. I am not promoting another Iraq style intervention; the first one was bad enough as it turned the Ba’athist Sunni secular minority into ISIS. However, there is no more room for moderates in modern Arabia, clearly demonstrated with the flogging of liberal blogger, Raif Badawi.
If that didn’t astonish you, they’re now proposing a 30km wall across the border with Iraq to stop people joining ISIS; this doesn’t portray a very libertarian society. Surely we shouldn’t be allying with countries whose elite are likely to be funding the terrorists, as seen in 9/11, where the majority of the hijackers were Saudis and the West was blinded, so no measures were taken by the Bush administration to monitor their allies.

This is clearly a case of double standards. Syria’s dictator must rightly fall, but Saudi Arabia’s one can stay. Would Iran be the next logical choice as an ally?

We look to Saudi Arabia as the geopolitical power in the Middle East and help it to dominate its surrounding countries; Yemen’s own capital Sana’a fell to Shia Houthi rebels; Saudi Arabia sent troops to destroy the Shia majority rebels in the Sunni Kingdom of Bahrain and then went on to persecute its own Shiite population. The east of Arabia looks to be threatened by Shia militias if autonomy and equality aren’t restored to the people, but worry not! Iran is the biggest threat and the US and UK’s military bases in Bahrain, the Gulf States and the Horn of Arabia must not be compromised. The entire region is in religious and cultural turmoil. 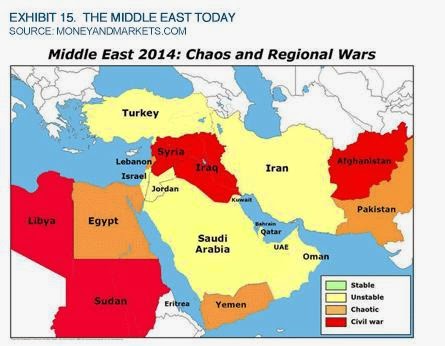 Large factions of Saudi Arabia’s population secretly sympathises with al-Qaeda and ISIS (2,000 of 32,000 IS members came from Saudi Arabia).
ISIS has continued Saddam Hussein’s persecution of Yazidis, Kurds and Shiites but taken it to new extremely brutal heights; Abu Bakr al-Baghdadi (ISIS’ “caliph”), has called for the annihilation of every Shiite. In simple terms, this is a very big problem, more so for Iran whose population is almost entirely Shia. Even then we can’t seem to cooperate; the Paris conference on ISIS was a contest between the wills of Iran and the USA. The US-led coalition has not extended its arm to Iran, even though they both fight the same terrorists.
So where should Britain stand on this? We can’t follow the US all the time; we aren’t as conservative as they are. Here, Tony Blair has been subject to multiple citizen’s arrests, whereas there, George Bush’s younger brother, a hypocritical former marijuana user, Jeb, is being touted as the Republican nomination for the presidency.
We are, on the whole, a liberal educated society which needs to act as such. Letting our government decide on what course of action we should take without our input is the UK’s hamartia and we need to address this before the Middle East and the domestic situation gets more tense. So with the death of Abdullah and the probable increase in diplomacy that will follow, where should the British public stand?
I believe we should separate our dependency on Saudi Arabian oil from our foreign policy as a strong, liberal and democratic nation. We should also lift some sanctions on Iran to help keep a regional power stable when the rest of the region is war-torn. Finally, we should call on Turkey to conduct airstrikes to reaffirm their opposition to ISIS while pacifying their Kurdish population, and let regional powers, like Egypt and Jordan take the fight to ISIS. With all these measures, maybe the situation in the Middle East will improve and the return of secular democracy can penetrate the alienated populaces to turn them away from the encroaching fundamentalism scourging Islamic nations.
Want to support young writers? Then please share!